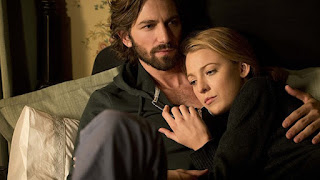 Every September my romance friends and I get together to write and brainstorm romances. We also discuss and analyze a romantic movie. This year I suggested The Age of Adeline, because well, Blake Lively and Michiel Huisman have great chemistry (to be fair, she probably has great chemistry with everyone). I also suggested it because lately there just aren’t a lot of Hollywood romances, and the ones they release are usually romcoms, which makes me sad. And it also makes me think about my top ten favorite romantic movies. So here they are, in no particular order. And yes, some are romantic comedies, and boy, are they all good!

Romeo + Juliet—As a kid West Side Story was my favorite and I officially fell in love with Romeo and Juliet with Franco Zeffirelli’s 1968 version. But in 1996, Leonardo DiCaprio + Claire Daines + that soundtrack blew me away and this became THE Romeo and Juliet.

Dirty Dancing—One phrase says it all “No one puts Baby in a corner”. If you didn’t quote it with me, go and watch this movie!

Somewhere in Time—How far will you go for love? Well if you’re Christopher Reeve in this movie, it would be several decades. Come to think of it, I haven’t seen SIT in a while; I might just have to watch it again soon.

The Incredibly True Adventures of Two Girls in Love—There is nothing like teen love, and these two girls remind you what it’s like to find love for the first time. Le Sigh.

The Enchanted Cottage—Two lonely people plus one cottage equals all kinds of romance. Every time this is on, I have to watch it. Get your handkerchiefs out; this one will make you cry. If it doesn’t, you might be a sociopath.

Gigi—This is the dream of every mistress everywhere. Go see it for the music, the pageantry, the forbidden chemistry between Gigi (Leslie Caron) and Gaston (Louis Jordan). Hell, go see if for that white and black gown Gigi wears at the end of the movie. If you think Julia Roberts kills in her red dress in Pretty Woman, do yourself a favor and get firsthand knowledge of how it’s really done in Gigi.

Pretty Woman—Speaking of Pretty Woman, this is like Gigi’s non-singing cousin. And so, so good. Richard Gere makes salt and pepper hair hot in this flick.

Imagine Me and You—What happens when you meet the love of your life at your wedding? Well, that’s the question Imagine Me and You poses. This one is so very very romantic. Shout out to Matthew Goode for almost stealing the show.

Chasing Amy—I said these aren’t in any order, and they aren’t, but this is my favorite movie (along with It’s a Wonderful Life), so technically it is my favorite on this list. But I digress. Is she a lesbian or isn’t she? This is Gen X’s dream come true. It’s got Ben Affleck and Matt Damon (don’t blink), comic book subculture, gays and more. Oh and Silent Bob and Jay, my personal faves in the whole damn film.

So that’s it, that’s my list. Do yourself a favor, don’t wait until February to catch one (or all) of these great movies.